Since our 2016 relaunch, we have been in consultation with IP Australia and various Government agencies, joining other industry groups to help shape the best possible future for the growth of the Australian furnishing sector.

Mid 2021, IP Australia completed a two-year Review of Australian ‘Design Systems’, the outcome of a two-year enquiry by the Productivity Commission into Intellectual Property rights across all sectors. The review identified short-term wins that have since been fast-tracked, with more legislative changes and policy amendments to be introduced in the next two to three years. As we’ve said before – affecting real change is a long game.

In March 2022, the Australian Government ratified the first legislation changes. Australia joined over 70 trading partners by introducing a ‘grace period’, a 12-month buffer zone where new works are protected prior to commencing the design registration process.

We will continue to work with Policy teams over the coming years as additional amendments are yet to be finalised.

Outside the current Policy changes currently on the table, we will campaign to introduce automatic copyright for furniture, lighting and designed objects. Copyright falls outside the IP Australia remit.

We seek industry-wide support for a long game as it takes many years to affect real change with law reform. 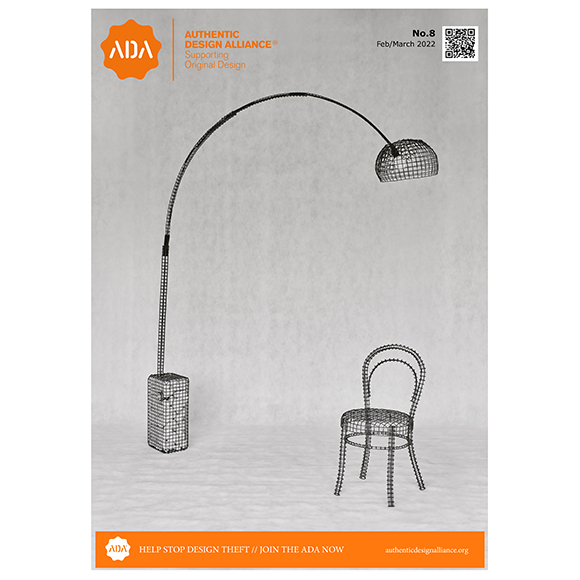 We continued consultation with the IP Australia policy team on legislation reform. During a roundtable series over Summer, the nuances of policy amendments for further legislation charges will open for public consultation later in 2022, prior to these additional changes to Australian Intellectual Property laws being officiated.

Our latest newspaper launched in partnership with the newly rebooted trade exhibition Interiors Australia + Denfair at the Melbourne Exhibition Centre. 10,000 copies of this edition were also distributed at our various Melbourne Design Week events and available nationally via the ADA Member showroom network.

Authentic Design Alliance exhibited a preview of ‘Caged’, a project by designer-maker Ash Allen, alongside the five ADA Award winners from the 2021 Design Fringe. Work by Marta Figueredo, Kirby Burke, Jill Stevenson, Lauren Haynes and Kathleen Prentice proved to be a visitor highlight.

Futures Collective at Villa Alba Museum, a new exhibition platform spearheaded by Spence & Lyda with Fiona Lynch Office, took over the historic Itallianette mansion in Kew for the duration of design week. The ADA was invited to showcase the full installation of CAGED, a series of functional sculptures made as 1:1 models of highly recognisable furniture icons handmade by Melbourne designers Ash Allen.

Say it Loud as a supporting partner; the ADA were proud to support this important exhibition of works by BIPOC creatives across the built environment.

We supported an IP Australia education series that unpacked the essential tools for protecting Australian designs and explored the impact of recent legislation changes.

ADA Stakeholders help shape our strategy and campaign objectives, and over four weeks, we met with key advisors to assist in forming future initiatives.

Continuing our partnership with Australia’s longest-running design competition, we joined the DIA, and media and event sponsors to judge the 19th edition of vivid design competition. The 2022 Authentic Design Alliance ADA Award of Merit was jointly received by Billie Cavello and Georgia Weitenberg.

Our event program will be announced in August.

Design Fringe, formerly Fringe Furniture, is a highlight of the Melbourne Fringe Festival. We join the award ceremony on September 16 to present our ADA Design Futures Award and will moderate a talk on October 6 at Melbourne Pride Centre, ahead of a networking event for all finalists. The exhibition is held at Linden New Art and Carlisle Street Arts Space (inside St Kilda Town Hall).

Booking links are yet to be released for our talk at Melbourne Pride Centre in St Kilda.

The ADA will debut CAGED in Sydney, a functional sculpture series of famous furniture pieces reimagined 1:1 scale by designer-maker Ash Allen, that previously joined the Melbourn Design Week program earlier in the year.

ENLIGHTENED is an ADA-produced panel discussion in partnership with ADA co-founders Euroluce. The panel featuring Kirsten Stanisich (Richards Stanisich), Tim Carr (Arup), Alex Fitzpatrick (ADesign Studio) and Euroluce brand manager Patrick Lourie will be moderated by ADA Director Anne-Maree Sargeant.  Exploring the four pillars of lighting specification from the perspective of specifier, lighting design and engineering, luminaire and custom fixture design, and distributor, the discussion will spotlight the essentials needed for each part of the process and explore the required foundations to successfully light commercial and residential projects.

Details and dates are to be announced soon.

This year we are introducing a new workshop series to educate industry, media and consumers about the value of upholding and respecting Intellectual Property. Sessions for designers, designer-makers, manufacturers, and interior design professionals.

Don’t hesitate to contact us if you wish to include these sessions within your event program.

With stakeholder and industry consultation – we will drive a strategic campaign in partnership with ADA members and affiliates.

As a member-funded association, membership fees directly fund our advocacy and enable the ADA change campaigns and education programs.