The AUTHENTIC DESIGN ALLIANCE was established in 2010 as an industry association in response to the sea of cheaply made counterfeit furniture designs that began flooding the Australian market in the early 2000s.

Founded by furniture distributors Stylecraft, Cult, Living Edge, Euroluce, and Ke-zu, the group launched campaigns to educate design professionals about problems caused by substituting replica furniture and lighting designs. They also united to take legal action against replica retailers. Unfortunately, the estimated legal fees for a class action were extreme and not viable. So the focus remained on educating the interiors industry.

In 2012 Herman Miller tackled Matt Blatt legally for the use of the word replica, claiming it mislead customers to think the knockoffs were connected to the original creator or the licensed brand. The High Court of Australia ruled that the word replica can legally be used to delineate copies from the authentic product. And the knock-off industry boomed.

Legally anyone can use the designer’s name and leverage their reputation, including the product name to sell cheap copies of their own works.

The replica problem continued to escalate. Cheap copies became less and less expensive, and the race to the bottom with price began.

These short lifespan, low-quality products fuel curb-side throwaways. Consumers have become indoctrinated to think ‘the cheaper, the better’ and are seduced by clickbait offers with no thought to environmental impact or the massive contribution to landfill. We call this ‘disposable decorating.’

By then, design theft had extended beyond iconic pieces.

Bestsellers by famous international designers and work by local Australian creatives became widely knocked off. Google, Instagram, and Pinterest made finding the cheapest-looking design products easily accessible with a few keyboard clicks, and the problem with design theft continued to mushroom. 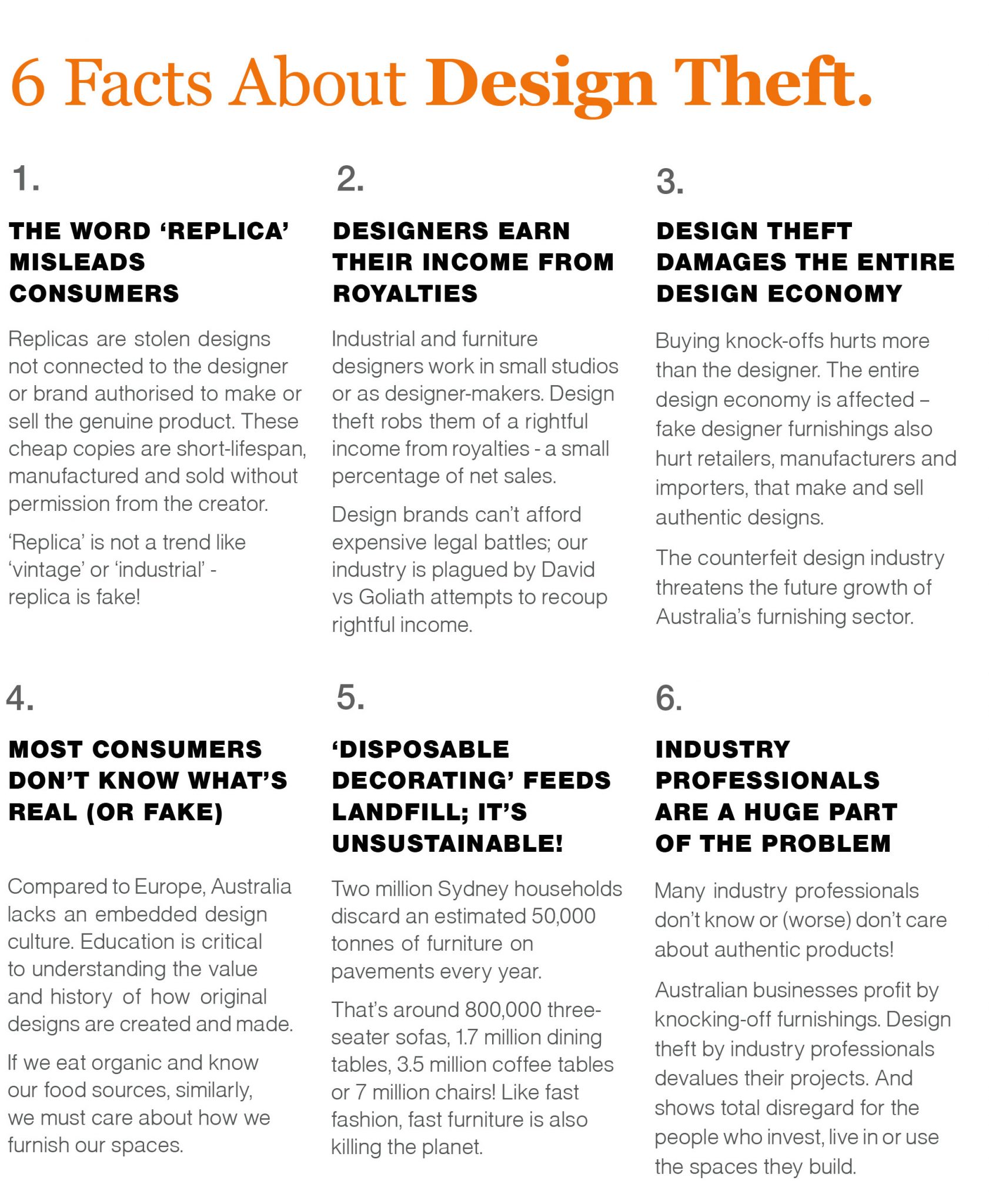 In 2015 the ADA founders knew that achieving real change required full-time focus, and they handed governance of the ADA to an independent team led by Anne-Maree Sargeant (AMS).

The new team spent 12 months defining the core industry issues and re-establishing the ADA as an association that could best serve the furnishing sector.

Launching in partnership with Good Design Australia at Sydney’s Overseas Passenger Terminal during VIVID Sydney, AUTHENTIC DESIGN ALLIANCE 2.0 debuted in May 2016 with a new program, a new team, and a revised mission!

ADA rebooted a Social Enterprise with the core mission to impact purchasing behaviour and to instil best practice across the design industry, design media, and end-users (consumers & business customers).

WHAT ABOUT THE LAW?

With insufficient protection from Australian IP laws, design businesses, creators, and manufacturers continued to be savaged by knockoff merchants.

The UK suffered similarly, but in 2016 Britain bowed to intense pressure from trading partners and made the sudden announcement that selling and promoting replica products was criminalised. Introducing fines of up to £50,000 and 10 years in jail, the UK went a step further and backdated copyright protection so that many iconic designs were protected in line with EU copyright law – protection for the life of the creator plus 70 years after their death (life+70).

Around the same time, the Australian Government held an inquiry into Intellectual Property (PCIP 2015-16) which lead to the Designs Review into IP systems conducted by IP Australia (2018-2021). Read about our outcomes here & ADA consultation with the government here. As of March 2022, the first round of legislative changes were implemented. So the route from campaign to law change takes many years – six years for round one improvements to become legally ratified!

SO WHAT DOES THE ADA DO? // ADVOCACY

AUTHENTIC DESIGN ALLIANCE has been in consultation with various government agencies since 2016. Whilst some progress has been made regarding the design registration process and the recent ‘Grace Period’ – three-dimensional designs like furniture and lighting are still NOT protected by Copyright.

Creative disciplines like art, photography, music, literature and film are protected by copyright under Australian law. Copyright protection is free and automatic. We fail to understand why furnishings are treated differently.

Appropriate Copyright protection for the sector is the core of the ADA mission.

Or join our campaigns and GET NEWS or support us by BECOMING AN ADA MEMBER here.

“Australia is now the ‘Wild West’ of  fake designer furniture!”

As a member-funded education association, we exist to promote the value of original furniture, lighting and designed objects, in the fight against design theft.

With unscrupulous brands profiting from counterfeit designs, these retailers are legally allowed to use a creator’s name and leverage their reputation to sell cheap copies of original works. Knock-offs damage not only the designer’s reputation, the also negatively impact the broader network of manufacturers, distributors, and retailers!

We advocate for increased Intellectual Property (IP) protection for the design sector, and believe ‘replica’ furniture products should be made illegal in Australia in line with the UK and Europe. We strive to encourage industry best practice, and to drive a shift in buyer behaviour to support original design in support of a more sustainable future.

THE PROBLEM WITH REPLICA PRODUCTS

Knock-offs of famous furniture pieces are legally permitted use the designer’s name to sell cheaply made versions of instantly recognised designs.

A group of concerned showrooms founded Authentic Design Alliance® in 2010 in response to the ever-growing problem of knock-offs in Australia.

By 2012 local designers discovered that their most successful designs were quickly ripped-off. Badly made, low-quality copies of their work popped up in stores and online as the problem spiralled.

In 2016 Britain criminalised replica products, introducing fines of up to £50,000 and 10 years jail.

Meanwhile – the Australian Government held a 2-year inquiry into Intellectual Property (IP) protection and copyright laws. No recommendations were made to further protect designs. ‘Replica’ designs were not mentioned in the final report, and remain legal.

In Australia – furniture and lighting can be protected by design registration with IP Australia. This is expensive and complicated, and design protection lasts a mere 10 years or 5 that must be renewed for an additional 5 years.

European and British designs are protected for the life time of the designer plus 70 years (*life + 70). Automatic copyright also applies to three dimensional objects like furniture and lighting.

In Australia – no automatic copyright applies to furniture and lighting. Film, Music, Art, Photography, Architecture, and Publishing are protected by copyright – but not furnishings.

We are a small team, supported by a group of independent industry professionals who contribute on a voluntary basis, led by Anne-Maree Sargeant.

With new campaigns for funding we are in the process of adding marketing and editorial staff to help roll out the program and campaigns.

Authentic Design Alliance pty ltd was established by our legal partners Banki Haddock Fiora in August 2017. The company is structured as a ‘Social Enterprise Potentially for Profit’.

Prior to ADA® membership re-launch in late 2017 –  activity has been funded by our re-launch partners, event sponsors, and AMS Associated Marketing Services pty ltd.

An non-executive board representing a range of industry voices – will be announced later this year. Bi-annual meetings will review ADA® outcomes, evaluate key objectives, and advise strategic paths forward.

ADA® Platinum and Gold Premium members contribute to meeting agendas and are invied to join ADA think tanks and round table sessions.

“If it’s broken. Chuck it out.

Get another one. Right?”

Many Australians seem to think ‘the cheaper the better,’ and the culture of ‘disposable decorating’ contributes to a much bigger problem – tonnes of junk furniture ending up as landfill. If we now responsibly approach food and fashion sustainability, it is time for all to consider the impact of purchasing decisions for our homes and work places. Choose well, buy once, make it last.

We spotlight problems surrounding design knock-offs and promote awareness about the value of original design, design history, making processes, heritage brands and the importance of #buywellbuyonce.

Automatic copyright should apply to designed objects. 10-year design registration is not long enough to recoup investment or create sustainable income streams. IP protection must align with UK and Europe.

Our program opens ‘design’ to everyone – beyond industry to design-interested consumers and businesses. Good design does not have to be expensive, and if an item is expensive it reflects the cost of getting the product to market.

5. WORK WITH OTHER ASSOCIATIONS

To support, promote and create opportunities for our members, we host think tanks, talks, workshops and events to strengthen industry connectivity, education, and pro-action, and encourage industry best practice.

WE LISTEN – Our program is informed by industry, sign up for news & events.