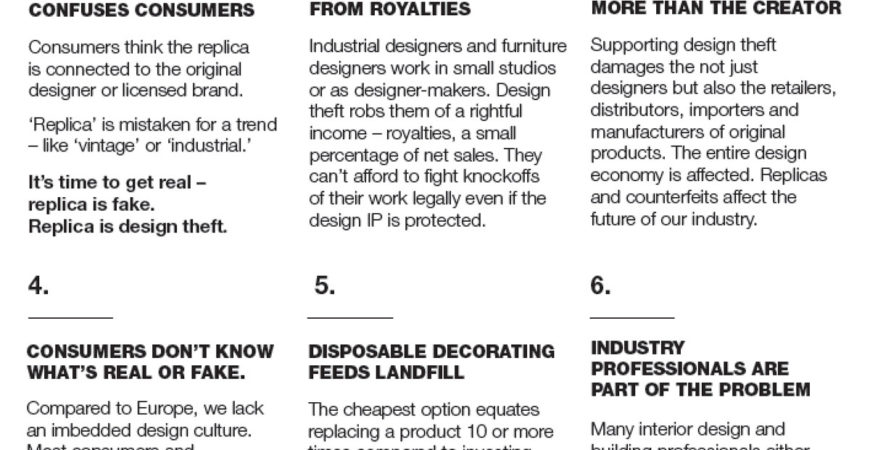 WHY JOIN THE ADA®?

"Australia is the 'Wild West' of fake designer furniture!"

As a result, Australia is now targeted by unscrupulous local and international businesses that are flooding the market with cheap furniture and lighting knock-offs. the problem is accelerating and now bathware, architecture hardware, and other products are being crippled by copycats.

Consumers, businesses, and building industry professionals with the 'as cheap as possible' mentality drive a growing market for low-grade, short lifespan products. They either don't know or don't care what's real and what's fake, fueling a race to the bottom for the cheapest possible price.

"The culture of 'disposable decorating' feeds landfill, and 'built to last' has been replaced by the notion of 'if it's broken chuck it out, get another one!' "

ADA® advocacy includes direct contributions to industry think tanks, policy reviews and relationship building; lodging reports and making appearances during the Productivity Commission (2015-19), IP Australia review into design systems (2019-current), and expanding our network within local, state and federal government.
+
Our goal is for the word ‘replica’ to be eradicated from the industry, and that unlicensed products are criminalized in line with EU intellectual property enforcement.
Join the growing network of brands and businesses committed to authenticity who help promote our campaigns to outlaw design theft.
+
By aligning with our core values your brand communicates the fact that intellectual property (IP) theft, knock-offs and swapping out products for cheap copies causes immeasurable damage to the industry at large.
It’s time to get real, buy real, supply real!
The ADA® exists to promote the value of original design to support the creators, brands, manufacturers, distributors and retailers of genuine furnishings in the fight against design theft.
+
As the thirst for cheap imitations of commercially successful original products accelerates, we need member support for further education about why products exist, cultural relevance, how they’re made, and why investing in design is a decision around quality, ethics and longevity.
Europeans have an inherent cultural understanding and respect for original design, one that values and informs purchasing decisions that supports buying products once, and buying for life.
+
By contrast, Australian consumers and many industry professionals are design ignorant, and either don’t know, or worse, don’t care about what’s real and what’s fake. Help the ADA® to reach a wider audience via education about the ethical and cultural importance of supporting authentic products.
We encourage our affiliates partners and members to contribute to the ADA® agenda, and help us address key issues, created core messaging and develop strategies to affect real change.
+
Powered by industry to empower industry, we invite you to join us and have a say. Premium Members (Platinum and Gold) are welcome join our round table sessions.
Take advantage of discounted advertising, and event and podcast sponsorship opportunities. ADA® event calendars attracts 10,000+ attendance annually, and the bi-annual ADA® Tabloid (10,000+ per issue) is distributed at partnered design weeks, trade shows, member showrooms and events nationally.
+
Members also help fund our media and PR campaigns and sponsored social media posts that extend our messaging to a broader audience.
JOIN THE ADA@