Our interview by new media news site GOAT went viral. #IntellectualProperty was trending as broader issues of design theft hit the millennial readership with some basic facts about Australia’s lax IP protection for furniture and lighting.

Hot off the back of the original design by Miss Glass Home being knocked-off by Aldi – new media platform GOAT picked up the ball with one simple fact most creatives aren’t aware of. If you post your design online prior to applying to design register the product with IP Australia – designs that appear in the public domain (including social media) can not be registered!

AUSTRALIA HAS NO ‘GRACE PERIOD’

The UK and EU extend 1-2 years automatic protection to designs prior to design registration. Known as a 1 or 2 year ‘Grace Period’ – the time frame allows designers to refine design by seeking customer and industry feedback prior to launching the final design. Feedback typically comes from exhibiting prototypes at trade fairs, getting media exposure (print & online) and of course, via social media.

Unlike protected territories – Australia has no Grace Period. So if it’s on Instagram first, forget applying for design registration!

The transcript below from GOAT – the millennial friendly ‘mobile only’ news site (*desktop reading possible via scrolling the iPhone icon).

Made Something Rad? Well, Keep It Off Insta, Unless You’re Happy Losing The Intellectual Property Rights To It

Musos, writers and artists have their work covered by copyright. For designers, however, it’s complicated. 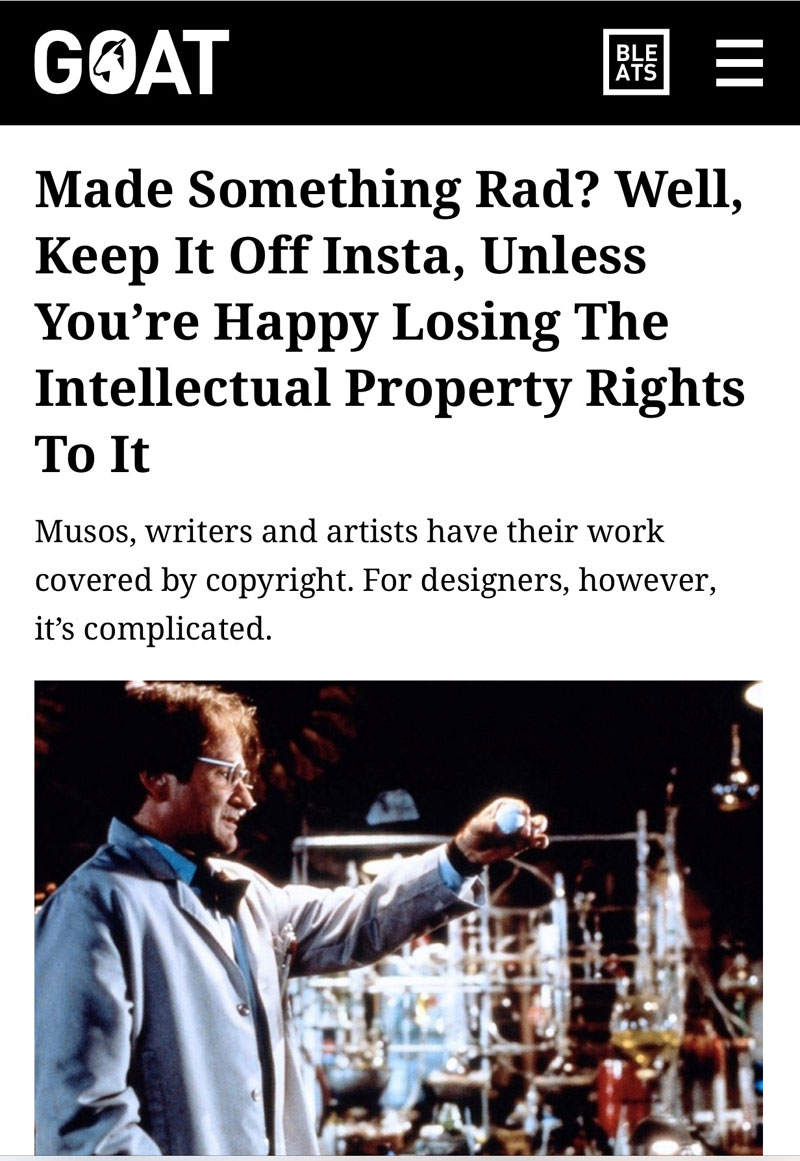 There were twenty minutes in 2016, where I had invented something amazing.

That was the end of my career as a designer. I didn’t even get past the initial concept stage.

However, after reading a recent Facebook post from Miss Glass Home, I think that’s as far as I’ll ever get as a designer. As it seems that – especially in Australia – the big retailers are too quick to pinch from the little guys.

Back in September last year, Siobhan was lucky enough to have one of her airers appear in an Aldi catalogue, where it was used to better display Aldi’s range of discount towels.

Glass loaned the airer to Aldi for their shoot, as this was a huge break for a small designer. Aldi’s catalogues have a national readership and Aldi Australia’s Facebook page has over 500,000 likes. So, this looked like a massive break for the Miss Glass airer.

I’m happy to report that it worked, and people everywhere loved the design and began commenting on the Aldi Australia Facebook page, asking about buying the airer.

Sadly, however, they wouldn’t buy it from Miss Glass.

As you can see in the above post, Miss Glass’ ethical, locally produced, $329 piece of furniture had been replicated by Aldi, and re-sold for next-to-nothing.

Sadly, Glass hadn’t registered the design with I.P Australia, and – as she’s posted pictures of it to the company’s Instagram account – she wasn’t able to register the design anyway.

In short: if you chuck your design on Insta – you can’t register it with IP Australia.

Speaking to Anne-Maree Sargeant at the Authentic Design Alliance, Anne-Maree told GOAT that this isn’t the first time a new designer has had their products copied by a large chain, and the numbers are growing, as more craftspeople begin using the internet to sell their products.

“There’s a growing community of makers here in Australia. People who put a lot of blood, sweat and tears, and a lot of their personal investment into these products… but there’s also a lack of awareness around intellectual property.”

“There’s a growing community of makers here in Australia. People who put a lot of blood, sweat and tears, and a lot of their personal investment into these products… but there’s also a lack of awareness around intellectual property.”

Sargeant explained to us that putting your designs on Instagram isn’t the only thing that could void your chances of registering with IP Australia, “…it’s anything in the public domain. And that includes blog posts, articles or even exhibitions.”

Basically, if other people can see your design before it’s registered, then big chains are free to “replicate” your product. Sargeant explained to us that while there are some pretty strong protections for fashion and graphic designers, “when it comes to furniture designers, lighting designers or designer-makers, they’re open to knock-offs and counterfeits – even on home turf!

Sadly, Sargeant says that most designers who have their products replicated by a large chain, stay silent to fear of being sued for defamation, as they are often up against “multi-billion dollar companies.”

Anne-Maree likens the current situation to the Australian produce market, where consumers only care about getting the best price, “…it’s a race to the bottom.”

So, after seeing what this market has done to our farmers and growers, I hope that something changes for our makers and designers.

If not: we may not have a maker community for much longer.

Have you read our new ADA Tabloid Newspaper? // read or download

Contribute to our industry survey by submitting a case study and help us understand the breadth of the problems surrounding design theft in Australia.

We are currently researching the scope of design theft and industry input is welcomed. Case studies can be anonymous or specific.

Later this year we will announce an industry-wide survey as part of our campaign for improved Intellectual Property (IP) protection.

MEDIA :: DESIGN ONLINE on the ADA Vision, Journey and Outcomes

JOIN THE ADA :: WHAT MEMBERSHIP IS RIGHT FOR ME?